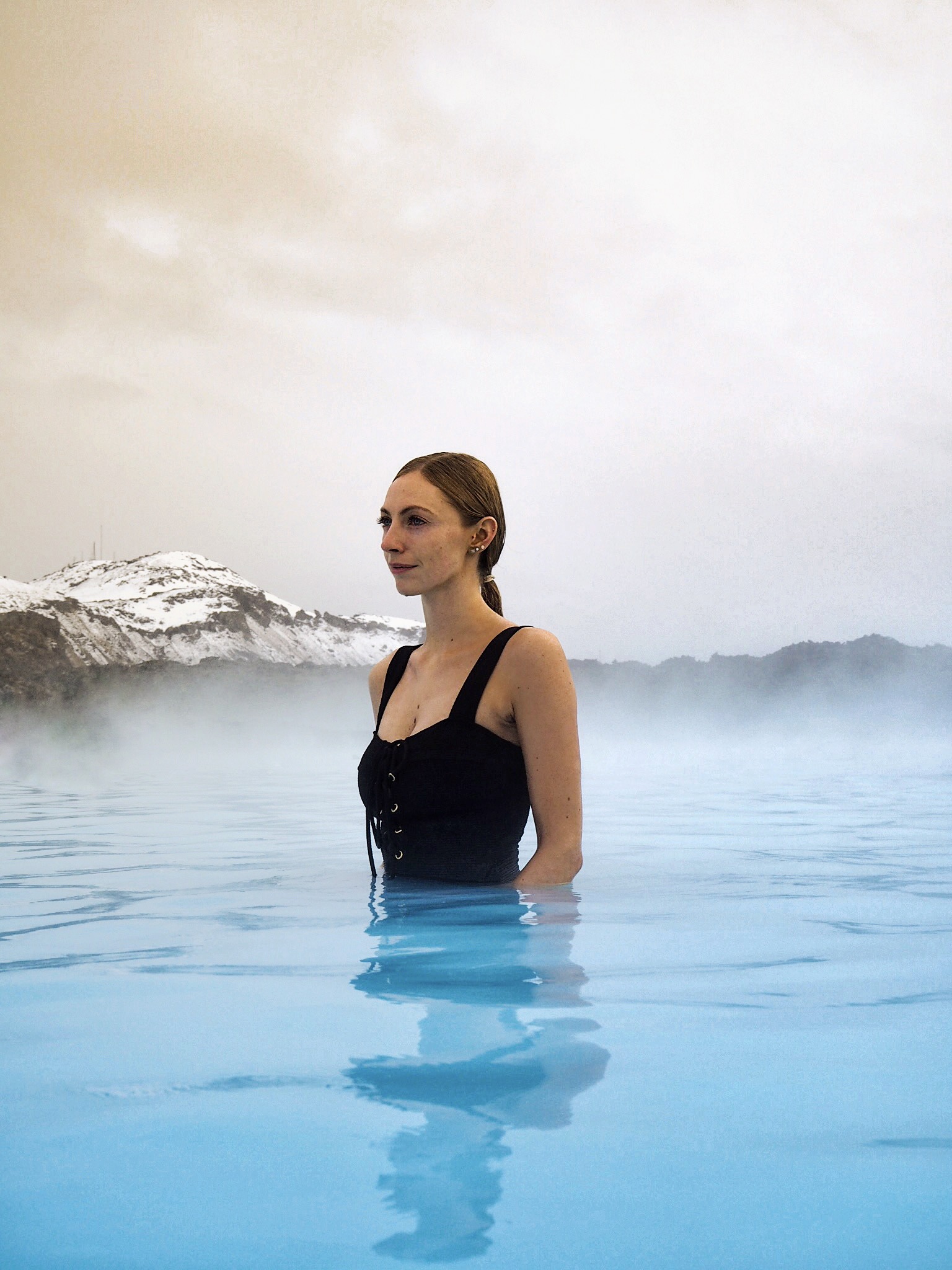 Posted at 15:19h in Europe, Iceland by Annmarie Judge

Iceland is one of those countries that seems to be on everyone’s hit list. When Andrew and I first started talking about the countries we would love to see, this one kept coming up. So, for Christmas, I decided to surprise him with flights to visit over St. Patrick’s Day weekend.

I booked our flights about five months in advance of our trip dates. After spending a long time calculating the total cost with a number of airlines, I decided to book with Icelandair. I chose the standard economy fare (the lowest class) and it included a 10kg carry on bag and seats. While other airlines initially seemed cheaper, the fare price didn’t include seats and carry on luggage was an additional cost. Taking all of this into consideration, Icelandair was the best value and the flight times were much better too.

The whole experience with Icelandair was top notch. In fact, I would go as far as saying that it was one of the most enjoyable flights I have been on! I really couldn’t fault it. The plane was extremely comfortable. They provide in flight entertainment and have USB charging ports at every seat. In addition, they also offer free tea, coffee and non-alcoholic beverages throughout the flight.

As we wanted to make our own way around the sights, we rented a 4×4 through Hertz. This was the best decision that we made. It meant that we didn’t have to rely on a tour guide, and could stop anywhere that caught our eye! It also gave us the flexibility to plan our own itinerary and we could avoid the crowds of tour buses driving a similar route.

The car we were given upon arrival was a Kia Sportage. Initially I was a little disappointed that we didn’t have something cooler. However, the car was a dream to drive and above all, it had all the latest technology enhancements including Apple Car Play. This meant that we could connect to Google Maps and Spotify directly from our phones, which was super handy and easy to do.

After trying (extremely hard) to pack a full set of winter clothes into my 10kg carry on, I admitted defeat and checked in a 23kg bag. In my opinion, packing for Iceland really depends on your planned activities and route.

If you’re staying in Reykjavík

If you’re staying in Reykjavík, then you won’t need to pack anything out of the ordinary. I would recommend taking clothes that you would wear on a cold day in any other European city. The key to Iceland weather is to wear layers so that you can stay nice and warm when you’re outside in the cold, but have the option to remove one or two when you taking a break.

If you’re taking advantage of the sights around Reykjavík then there is no need for fancy footwear. The streets are kept pretty snow-free so any comfortable footwear will be fine. I wore my runners the entire time we were here, and I was perfectly fine.

If you’re venturing outside Reykjavík

If you plan on visiting the attractions outside of the city, such as those found on the golden circle or ring road, then there are a few extra items that I would suggest you pack. These include thermals (if you’re a cold person like me!), waterproof pants and good waterproof boots for walking on ice and snow.

Some of the best attractions are off the beaten track and can take some time to reach from the main carpark. For example, we walked about one hour in order to get to the plane crash on black sand beach and about 30 minutes to reach Gljúfrafoss, which involved manoeuvring around an opening in the mountain, and strategically stepping on stones paved out to form a pathway. Staying warm and dry was a priority!

We did quite a lot of moving around during our short time in Iceland, and I would totally recommend it to anyone else visiting. Our route was as follows:

If you don’t want to drive, you can definitely base yourself in Reykjavík and book day trips from there, so don’t worry!

There are so many cool places to stay in the Reykjavík, but you will most certainly pay to stay somewhere really nice!

A lot of people recommend booking B&B’s or airbnb’s so that they have the freedom to cook their own food, which I can totally understand but we chose to stay in hotels.

Two places I can recommend are:

22 Hill Hotel: We stayed here for our first two nights in Reykjavík. While the hotel was pretty basic, we had everything we needed. It was a short walk to the centre and all of the attractions, there was free parking outside and breakfast was included. The hotel itself is very clean, and it was a comfortable stay.

KEX Hostel: We went for happy hour drinks here one evening on the recommendation of one of our friends. It was such a funky place with a great atmosphere so I can understand why it books out so far in advance! They have dorm or private rooms, and I would have stayed here no problem.

Brú Guesthouse will always have a special place in my heart, as it was here where we encountered the Northern lights while we were staying in our little unit. I could not rate this place highly enough! While the guesthouses are small, they offer so much privacy and are designed so well that you don’t notice it. Not only that, they also have cooking facilities fully equipped with everything you need to cook for yourself. The property is located just off the main road (1) and is the perfect stopover on route to Seljalandsfoss and beyond.

As we had an early flight home, we decided that we would stay close to the airport on our final night in Iceland. We picked Hotel Berg which is located just 8 minutes drive from the airport, and close enough to the Blue Lagoon where we spent our final day. This hotel was absolutely gorgeous. It has been recently renovated and is fully equipped with modern furnishings and a stylish design. The hotel was spotless and the bed was the comfiest of the lot! But, the best part of all was the rooftop heated pool that opens until midnight. This was the perfect way to end our trip and if I was to return to Iceland I would be sure to stay here again!

Eating out is considered to be relatively expensive in Iceland. So, if you are on a tight budget the best recommendation I can give you is to pick up some supplies so that you can prepare breakfast and lunch on the go in the local Bonus store. This is the Icelandic equivalent to Lidl or Aldi and you can find them in Reykjavík and surrounding villages. Once you venture outside of Reykjavík, you are more likely spot a Kronan or Netto. One thing to keep in mind is that these supermarkets close very early when compared to the rest of Europe and you will be lucky to find one open after 6pm!

If you don’t mind spending a little to eat out, here are some places in Reykjavík that we visited and didn’t find too expensive:

The best piece of advice we were given was to download the Appyhour app. It lists all of the special offers in any bars nearby which makes Iceland prices a little more normal. During happy hour you can get a glass of house wine for about €8 or a beer on tap for €5.

Some of the places we went to that had great happy hour deals were:

If you like nice cocktails then I would 100% recommend Apotek. While a little bit on the pricey side, the atmosphere was amazing and the drinks were absolutely delicious!

There are so many things to see and do when visiting Iceland. As you can tell from our route, we really tried to pack a lot into our 4 days. Here are some of the highlights that I would recommend to anyone planning a visit:

Whether you drive it yourself or book to go on a guided tour, this really can’t be missed. Not only do you get to see a lot in a short space of time, it also gives you a good insight into the Icelandic landscape. Some of the stops we checked out along the way were the Strokkur Geysir, Gullfoss Waterfall and Kerið Crater Lake (which was frozen!)

One of my favourite places was our lunch stop during our trip around the golden circle! We stopped here to try their famous tomato soup (which you can eat as much as you want of!) and it 100% lived up to its name. They had a full tomato inspired menu and you could take as long as you wanted to walk around the gorgeous greenhouses. Be sure to reserve a table in advance to avoid disappointment!

It is here where a US Navy airplane was forced to crash land in 1973. Thankfully all of the crew survived, but the plane was left abandoned and has become one of the most instagrammed spot in Iceland . While it takes almost an hour to get here from the car park, it was pretty cool getting to see a plane crash site up close.

We booked a tour with Arctic Adventures. Katla Ice Cave is situated under one of the most active volcanoes in the country. This was one of the highlights for me and as it is off road, it is definitely something that you wouldn’t be able to see on your own.

Last but not least, the beautiful Blue Lagoon. While it is a huge, overpopulated tourist attraction (which I normally hate!), I really enjoyed the few hours we spent here. The prices of the tickets vary depending on the time of day, but once you arrive you are able to stay for as long as you want. As we were driving back from Vík, we chose an arrival time of 6pm. It was still really busy, but it was a great to switch off, relax and just enjoy our evening. Included in the price of our ticket was a drink of our choice and a face mask. We spent the first few minutes taking some photos but then dropped the camera back and just enjoyed our time together. It really was the perfect ending to an unbelievable trip.

This post contains some affiliate links which means that I can make a small commission if sales are made as a result of this post. It does not affect the price of the item for you.