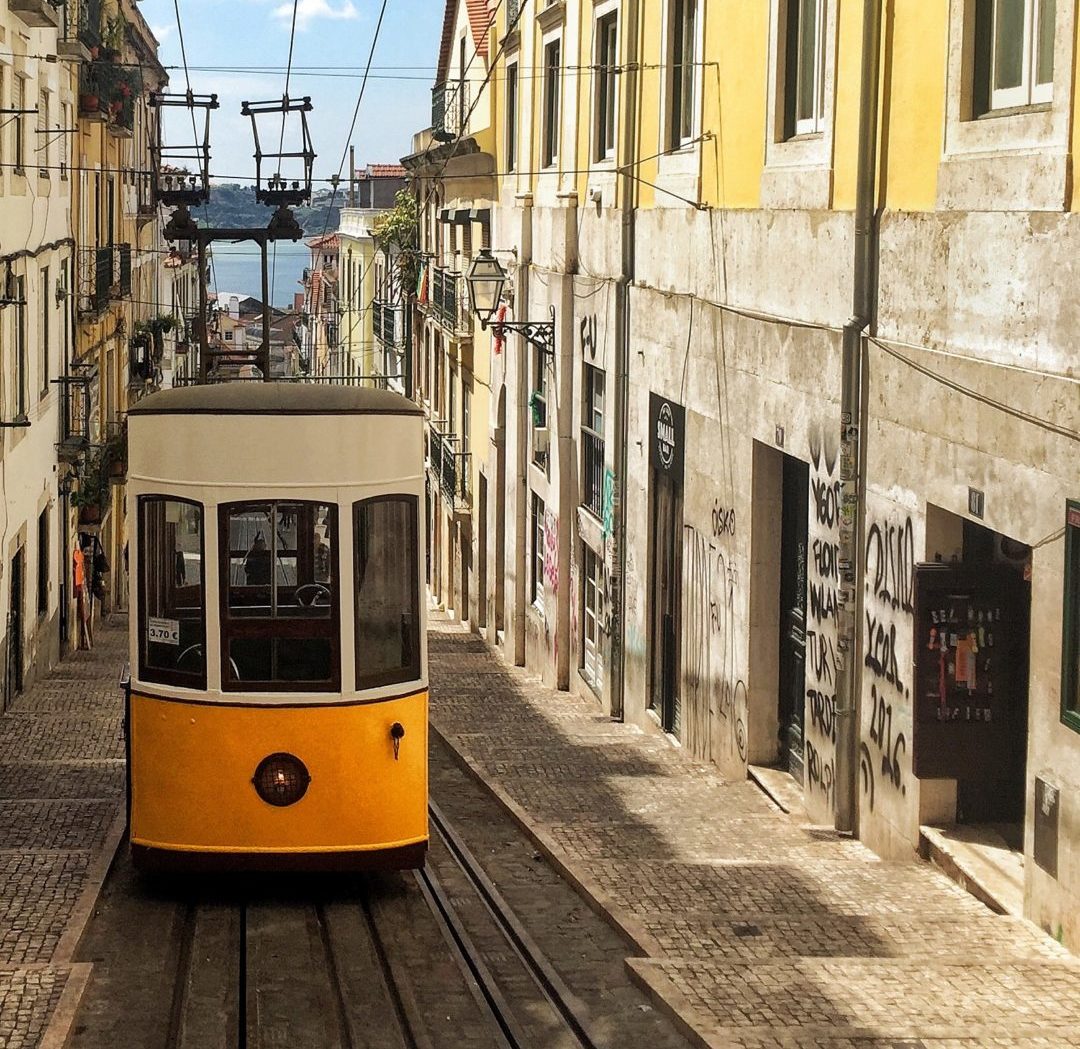 Posted at 21:30h in Europe, Portugal by Annmarie Judge

Last weekend myself and one of my best friends jetted off for an impromptu visit to Lisbon, Portugal. As we booked it spontaneously over brunch we hadn’t noticed that it was a bank holiday weekend and had just 48 hours to explore. To be honest I thought it would be too little, but we actually managed to fit a lot in; wandering, drinking and eating our way through the city.

We flew out on Friday evening after work, on an Aer Lingus flight that left Dublin at 7pm, and home late on Sunday night departing Lisbon at 10pm. The flight times were perfect and suited us down to the ground as it meant we didn’t waste any annual leave days (WIN!)

When we arrived at the airport we headed to the taxi rank, but the queue was INSANE, so instead we used the MyTaxi app and managed to quickly get a local taxi to meet us. I think the prices were fair, costing approximately €15 to our Airbnb.

We booked the cutest Airbnb that was in the Alfama area. It was a great location, within walking distance of Bairro Alto where you will find many bars and restaurants albeit a bit more on the touristy side. The accommodation was one bedroom with a kitchen bathroom and living area with a pull out double bed. It was beautifully decorated and even had a Vespa scooter in the living area that proved very entertaining while we were getting ready to go out! The host was also lovely, greeting us at the apartment and left us some wine, water and treats to welcome us. This was my first time using Airbnb and I will definitely be using it again in the future! New to Airbnb? Sign up here.

On our first morning we had no plans for breakfast and just stumbled upon this amazing cafe. The interiors were amazing, and the hostess was so lovely. We had missed breakfast (as we slept in a little!) but they still offered to make us eggs and bacon. I wasn’t expecting much to be honest, but I was blown away when the food arrived on a slate tile with heart shaped slices of toast, and the tastiest goblet of fresh orange juice on the side. Definitely a hidden gem well worth finding!

We had looked up a few places in advance of arriving and one that was always mentioned was Pois Café. So we decided to go there on our second morning. The interiors were quaint, couches, old trunk coffee tables and a bookshelf for customers to sit and enjoy.  We queued for about twenty minutes for a table. Expectations were high at this point. We were seated beside another family and from there on in, it was a bit of a disaster. Forgotten juice, the incorrect meal arriving, burnt eggs, no bill… I’m hoping it was a bad day for them, and others didn’t experience the same, however, I won’t be going back, nor recommending this place to anyone.

When we arrived, we were starving, so we dropped our bags off, freshened up and left in search of something to settle our hunger. We didn’t really know where we were going at this point, so we set off roaming the streets behind our Airbnb until we came across a place called Esperanca da Se. It was quite warm, so they offered us a table outside. We ordered Bruschetta and a Pizza to share and it was amazing. So much so that we contemplated coming back here on our second night here too!

On Sunday afternoon as we went in search of wine and tapas we stumbled upon a really quirky spot in Chiado called Bairro do Avillez – home of famous Portuguese chef José Alvillez. The location is open, and is aptly named due to its neighbourhood feel – each corner inspired by a different Portuguese flavour.

We had made a reservation in a restaurant called Sea Me for dinner on our last night, just before heading back to the airport. It was a recommendation from my friends Portuguese friend and I am so glad we took it. The food was incredible. Here we shared a number of small seafood dishes including tuna sashimi, cuttlefish in ink tempura and seared scallops. The prices of the small dishes ranged from about €6 – 12. Including a bottle of very nice Douro wine, we only spent about €80 between us. I would highly recommend to anyone visiting Lisbon.

Lisbon is famous for its Pastéis de Nata which are sweet custard tarts. They are best when made in house and can literally be found on any corner. As far as I am aware the first one was produced by Pastéis de Belém in Lisbon, where we happened to pass by when there was no queue!

Just go to Landeau Chocolate and eat the cake. That’s all I have to say. You will thank me later.

Before heading off we had heard about this cool place called PARK bar with unbelievable views of the city, and a garden terrace. We didn’t know much more than that, but decided to head on Saturday afternoon as we had a few hours to kill. Once we got there we were a little puzzled. There was no sign, no entrance, nothing. Just seemed like a run down parking lot. We figured maybe if we went to the top of it, we would be able to see where the rooftop terrace was, and find our way. To be honest we were a little freaked and never expected to find anything but we thought we’d give it a shot. So there we went, down a back alley and into the dodgey looking elevator that took us to the 5th floor. We walked out, to find a few cars and just around the corner…there it was. PARK Bar. It hadn’t opened yet, but already there was a queue of people waiting to get in, and we were glad we did too. The views of the city were out of this world, and the cocktail menu looked delish. We stayed for a drink and about an hour of vitamin D, before continuing on our travels. Definitely worth a visit.

Another place we went to on Saturday night was Topo Cocktail Bar. Another rooftop bar with an unconventional entrance through what appeared to be a derelict shopping centre. This place was trendy and kind of hipster-esq. Your typical soho, gin in goblets and cocktails in mason jars kind of place. Music was decent but the bar staff were not even close to comparable to home. Even though it took awhile to get served, it was a cool place to see.

Bairro Alto & Chiado is the place to go for nighttime entertainment including bars, clubs etc. however we didn’t spend much time there.

Lisbon is such a beautiful city packed with churches, monuments and just the most picturesque buildings. We packed a lot in for just 48 hours, including a half day trip to Sintra that we booked with Viator. The tour was definitely long enough. We managed to cover a lot of ground including. This included a tour of Pena Palace and time exploring the fairytale town of Sintra. After, we stopped at Cabo da Roca and Cascais. Here we managed to take some pictures of the cliffs forming Hells Mouth. If you want to visit Sintra and especially Pena Palace, I would recommend going as part of a group tour rather than driving. The roads are extremely dangerous and the journey up to the palace was quite scary (maybe that’s just me!)

We also visited Embaixada, which is a concept store in the trendy neighbourhood of Príncipe Real. Here you will find a number of collections from national brands and artists. These  focused on Portuguese design, craftsmanship, fashion, gastronomy and culture.

After Embaixada we strolled to a nearby viewspot called Miradouro de São Pedro de Alcântara. Here we found a market and beautiful gardens (it was a Sunday afternoon). We got a small serving (haha!) of sangria each and just chatted away for a few hours. It was beautiful.